Ever since the State of Kansas passed and implemented permanent RON legislation, we’ve been hard at work to get RON off the ground and running.

We’re thrilled to introduce you to our friend RON.

RON stands for Remote Online Notarization. This is the process of a signer appearing before a notary public (with RON designation) via a recorded audio-visual call. The documents are signed and notarized electronically, and the signer must complete KBA (knowledge-based authentication) identity verification prior to signing.

The implementation of KBA identity verification makes completing a signing and notarization with RON technology even more secure than in-person.

Why does RON matter?

Over the past few years we have come to understand the need to be flexible and introduce remote solutions. Beyond quarantine and illness, we’re living in an increasingly digital world. If you can order your groceries from your couch, why not buy or sell your house? Both are inevitably quicker and contact free.

The significance of RON goes beyond a matter of convenience. Sellers often move before the sale and buyers aren’t always available to close. Our Kansas RON notaries can complete a notarization with a signer anywhere in the United States. Over the past month, we’ve completed deed packets with sellers in Colorado, Iowa, Texas, and right here in the Flint Hills.  These signings took no more than 15 or 20 minutes, proving to be quicker and more cost effective than overnighting documents back and forth to out of state parties.

How does it work?

Tallgrass Title has partnered with the RON platform Pavaso in order to complete seamless notarizations. Like many other RON platforms, Pavaso boasts KBA identity tools and an environment to perform audio-visual sessions, that are recorded and stored for 10 years (should there ever be any question about a particular signing or document).

If we decide that RON will be right for your next transaction, we will send the signer and any requested observers links to sign up for Pavaso in advance of the scheduled “closing” time. During this time, the signer will have access to review the documents they will be signing in advance. We feel that this gives the client opportunity to prepare questions for the closing agent and avoid the “rush” feeling that often accompanies in-person signings.

When will this be available?

It’s available now! We have been using RON to complete deed packets for several months now and have found this to be an excellent resource for sellers. We hope to utilize RON for loan packets in the future, but approval will always be up to the individual lender’s discretion. If your lending institution is interested in or already using RON, let’s talk! 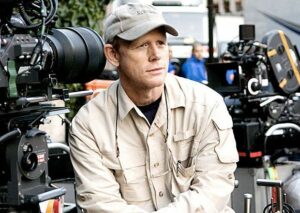 Last March we introduced our partnership with Earnnest, a tool that allows for the fully digital transfer of funds (much like PayPal or Venmo) but made for real estate transactions! That means it was designed with safety and security in mind.

Earnnest provides a way for the digital transfer of client earnest money into the title company of your choice’s escrow account, verifies “good funds,” and distributes documentation of the payment and deposit to all parties.

How does it work?

The title company or the buyer’s agent can complete a request for earnest funds through the Earnnest app.  We are happy to complete this request on behalf of the realtor – just ask us!  In order to, we will need your buyer’s email, phone number, the property address, and the dollar amount. Your client will then receive a text and an email that “Tallgrass Title” is requesting funds. 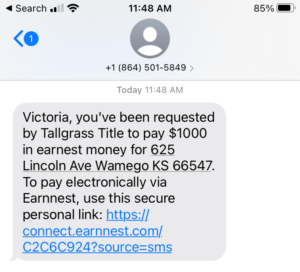 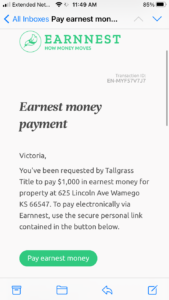 Utilizing electronic methods of contract signing and delivery along with Earnnest allows your client’s new home to go under contract in minutes with zero travel and zero wire fees. The only cost associated with Earnnest is a $15 processing fee paid by clients when they complete the request.  With wire fees approaching $30 or $40, this saves you time and your client money.

What makes it secure?

Earnnest is partnered with the payment processor Dwolla, which sets up a secure connection between all parties with multiple levels of encryption. Earnnest uses Plaid to connect the buyer to their bank to complete the earnest money request and neither party obtains or stores your client’s bank account credentials or financial information.

Once the buyer completes the request for earnest funds, all parties – the escrow company, the realtors involved, and the buyers – receive an email receipt verifying “Proof of Payment.” This tells us that the earnest money has been withdrawn from the buyers account, is verified as good funds, and is on its way!  Within 3 days, all parties will receive another receipt called “Proof of Deposit” – this tells us that the funds are officially in the hands of Tallgrass Title.  Contrary to how quick handing over a check seems, it isn’t always so fast.  Personal checks can take up to 10 days to clear the bank. Earnnest is the cleanest and quickest way to ensure the secure delivery of earnest money.

While entirely coincidental, adding Earnnest to our toolkit when we did was a gamechanger! Many of our everyday business practices have changed and we will continue to adapt as we move out of the Covid-era.  Adopting cutting edge tools for secure and paperless transactions will continue to be our standard.  We’re happy to utilize PaperlessCloser, CertifID, Dotloop, HelloSign, Earnnest, and another nifty product we’ll share with you in a couple of weeks that is going to make mobile transaction information and document access a reality.

Earnnest has even more to offer than we can cover here, if your curiosity is brimming, give us a call! Or you can check out Earnnest here! And if your client wants to complete their earnest deposit through Earnnest, we’d be happy to place the request for you or show you how!

After many debates around the office about the best bakery in the area, and more specifically, the best cinnamon rolls around, we decided to conduct an experiment.  I present to you the Tallgrass Title Cinnamon Roll Vision Quest.  In providing title services across the Flint Hills region, our staff has gotten into the habit of making pit stops for cinnamon rolls (and cookies and muffins…stay tuned) in the various towns we travel to and from to conduct title searches, perform mobile notary services, or deliver commission checks.  We decided to put the debate to rest and execute a super scientific analysis.

After sampling each cinnamon roll, our team completed a survey evaluating the specimen in regard to the flavor and quality of icing, roll density and flavor, the element of cinnamon (or lack thereof), appearance, and one’s personal desire to buy this cinnamon roll for their friends.

Whereas many of the otherwise delicious cinnamon rolls we tested lacked a strong cinnamon flavor, the rolls from St. George’s Kawffee Pot possessed a delightful amount of cinnamon goo. These rolls also had a rich and flavorful icing with elements of vanilla and almond.  These were definitely the sweetest of the contenders; if you’re looking for a rich and dessert-like treat, Kawffee Pot is the way to go!  The rolls themselves were quite fluffy, moist, and flavorful.

Radina’s and Bluestem Bistro, both located in Manhattan, served up the heartiest rolls we tried – maybe meals in themselves.  Both rolls were light, airy, and very fluffy!  Both less sweet than their rivals, Radina’s quality bread delivered a cinnamon roll that felt a little more appropriate for breakfast than dessert. Bluestem Bistro’s rolls were by far the fluffiest and most moist of our contenders.

Icing on the Cake!

The Alma Bakery and Sweet Shoppe and Sugar Creek in St. Marys both had such impeccable icing, our data collection resulted in a tie.  Thick, buttery, and perhaps sour cream-y, Sugar Creek delivered an outstanding icing that complimented their perfectly sized moist, albeit a bit dense, rolls.  Alma has stood out as a fan favorite around the office, in part due to their delicate, natural flavored icing paired with light and airy rolls with a strong cinnamon flavor.  These rolls didn’t last long around the office, what did last was the team scheming up reasons to drive to Alma for more.

Perfect and strategically located down the street from Tallgrass Title headquarters.  Our old faithful Friendship House cinnamon rolls.  Moist, light, and hearty cinnamon rolls with a perfect ratio of rich, buttery icing. And impeccably cute.  100% of respondents said these rolls were just right on sweetness, although there was some disagreement on whether they had quite enough cinnamon.

A visit to Clay Center brought the Tasty Pastry into the competition. However, they were fresh out of cinnamon rolls that day.  Lucky for us, a local advised we check out the Nut Rolls.  Covered in scrumptious nuts with plenty of cinnamon, icing, and still in a roll shape! These treats might qualify more as donuts but trust me, they still won us over.

Here at Tallgrass Title, we’re happy to help with all your title insurance needs, it’s our job!  Feel free to contact our title professionals with questions arising with a current closing or general inquiries about title and escrow services.  We’re also happy to offer our recommendations for the best local treats and eats. …we’d like to think it’s our job!